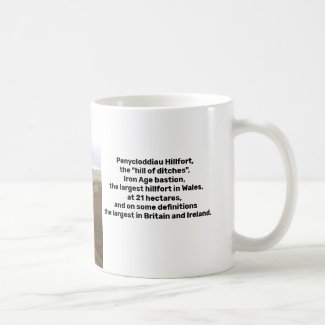 I am just writing to you all, to say I can tell you that Moel Arthur is a hillfort, that perches like a crows nest above one of the many passes of the Clwydian Hills. From it's top you can see to the west, the Vale of Clwyd, well this  Clwydian Valley, is a beautiful sight, spanning north from the middle area towns of Denbigh and Ruthin, then towards the sea a dozen or so miles to the north.

This oval shaped cone of a fort, is remarkably multi ringed for such a small interior. With 2 deep and high ramparts close together protecting it's bastion or some sort of centre. It looks north, towards peaks that contain forts such as Penycloddiau, which is easily achievable as a walk to it. Then south to a deep pass below it, and beyond there the hills including Moel Famau. Then to the east the Clwydian Hills fall away, and the lower uplands and plains of North East Wales, are there, and beyond there, the sights of Jodrell Bank, can be seen as a white speck, and the silhouettes of Beeston Hill, and the ridges there of Cheshire. So the industrial areas on North East Wales, and Merseyside can be viewed on clear days.

I note with interest, that from Rhosesmor's hillfort, Moel Y Gaer, you can see the Clwydian Hills, and the easily identifiable shape of Moel Arthur, but for me Rhosesmor just merges into the landscape from Moel Arthur.

Anyhow, the fort itself, sits on a peak that reached to 452 metres high, which puts it as among the higher third of forts in Wales, and even more so Britain as a whole. The peak, has a sharp drop to the south where there is a pass, that sits 310 metres below. I love to think that this fort was like a watchtower over this fort, that could watch over the pass, or light a beacon to warn of attackers. With hails of sling stones slamming down in any raiders or invaders.  Though others say this was more a ritual site.

I can tell you excavations here, found coarse Roman pottery, but it seems the astute guess is that this was a Iron Age site that had some Roman survival. With it also important to say the site had a interned entrance, which must have been important for anybody coming up along the path to it. I have some pictures of the site here, and they show how the ditches are remarkably deep. Also I should say the southern side over the pass is very steep, even for a hillfort. Any use of my pics, need's my permission. Obviously Moel Arthur has legends associated to King Arthur, with it's name, such as to do with a burial chamber here being his resting place, and the round table being here. It is easy to imagine the Bronze Age burial chamber here, was for someone of such importance to his time.  Though others say that those legends are modern constructs, so modern they are not even in our recent Welsh folklore, so maybe that is a purely more recent fabrication of a myth.  Anyway I do hope everybody is well.

P.S Moel Arthur is also known as Bryngaer,, which happens to be the direct Welsh translation of hillfort, seeing there is not a ancient tradition of a relationship to King Arthur, just like Caer Caradog near Cerriydruiidion, does not have a link with Caradog, perhaps this site had that Welsh term as the older term. Also some see this site as a partially ritual site., just as they do for that Caer Caradog in North Wales.

Hillforts and castles, and a directory n hillforts across the webs

I do not claim to be a professional, these are just barely amateur level photographs, but may be of use to somebody.