Mont-Saint-Michel and Saint Michael's Mount Coffee Mug
by cooldudeproducts
This site was designed with the
.com
website builder. Create your website today.Start Now

Tintagel Castle, or Tintagel Hillfort, as it would have been before it became a castle, is a site that has more romantic myths and legends attached it to it than most such a fort. The site on the north coast of Cornwall is a major tourist attraction for the county, and a major site that English heritage celebrates within the territory of the site.

It perches majestically over the typically rocky and cove covered north coast of Cornwall, a position that was useful to it's economic and likely political importance in it's story.

The site was a medieval castle, but is more valued, unlike most such structures for it's Dark Ages lore.

There is no doubt this site was a Dark Ages castle, or hillfort, and the museum at the site, these things are often more common to exist at castles than hillforts, has as I saw on my visit ,  a display of when it was a fort, and how the structure was developed overtime.

It should be added there is little evidence it was a major site in either the Iron Age or even the Roman era.

There is also no doubt it was a highly significant site.

It's main claim to fame is the stories of King Arthur, and of Tristan and Iselda, which was popular from the Medieval era into the Victorian era. King Arthur of course popular as a story even to today.

The Arthurian mythology to do with this site was strong in the Medieval era, when it was taken as a fact, but of course later historians saw King Arthur was as a mythological figure, who is more of a merger of different Dark Ages kings and idealised warlords. A reading of the Medieval myths of the great king can easily be fused with the know history of the era's Britons to picture a leader, or group of leaders just as romantic, and chivalrous as the medieval stories. Indeed Merlin, could be regarded as linked with the almost magical actions of Christian saints, of Celtic lands like Cornwall, or their Ancient Britons, or even the more Pagan Druidic faiths, which may have had elements surviving on a folk myths level in those times. Certainly there were British kings, of county sized British kingdoms, who cooperated and disagreed just like the knights of the round table and such. From bases like hillforts like the Rock, at Dumbarton, or the forts at Edinburgh, all the way down the west of Britain, stretching to Dinas Emrys in Gwynedd, to Tintagel. Plus likely some old Roman sites like Bath, Caerleon, and Wroxeter, even some sites at Hadrian's Wall, like Birdoswold, were utilised by some local princely warlords.

Tintagel though is the one, that stands out, with a statue built of the best mythical embodiment of these figures, the Dark Ages Celtic ubiquitous hero, Kink Arthur.

The castle today all stone, and standing above the clifftops on both the coast, and the islet a lovely wooden bridge it connects to is medieval, so I can kind of ignore it. Though the best myths of Arthur have a Medieval background, so there is no problem that being in his fictionalised portrayals.

Geoffrey of Monmouth, a Breton Norman, proud of his Celtic heritage, was able to fuse both Brittany's myths of Arthur, it where many West Britons took refuge after Saxon moves west in the the sixth century, and Welsh myths of King Arthur, and his own imagination. He believed that Arthur's parents were from this site, or stated it in the story he wrote about the figure, that they were. It was of course this writing that made the Celtic myth internationally famous, and is the reason we remember it more than many other Celtic myths than today, as a world.

The fort, would have been on the islet, a real promontory fort, using geography to defend itself, even more than ramparts.

Indeed this site has strong evidence of being a post-Roman royal site, significant for an area of much wealth from continuing Mediterranean destined tin exports. With it seems a local or regional king and his low hundreds group of people being here, and then at other locations across the year. Revealingly this site has far more imported pottery for the 450AD to 600AD period than any other part of Britain. It being believed entire ships of hundreds of amphorae docked here from the Mediterranean to send exports from the beaches below, maybe using old Roman roads to send goods east.

It was among the longer lasting parts of British culture, in South West Britain. It seems Cornwall survived as a kingdom till the Mid ninth century, when it became more under the thumb of Wessex, though Cornish society and Celtic culture lasted long after then, partly as of Devon and the faraway distance of Cornwall, keeping it at bay from the English kingdoms.

Dumnonia was the name of a major Devon and Cornwall state, that had to last past the Saxon taking of Bath and such in five seventy seven, so in that regards it lasted quite long.

So for my money  there is no doubt Arthur style figures existed and that Cornwall and Wales, and all sorts of sites in England, like Chester, and such can claim some kind of link with the various figures who inspired the legend. As for that matter, Glastonbury was an Celts site as well, so it can link with the guys, and heroic figures from the myths.

You could say Cornwall, is the last flyer of the flag of the old British kingdoms of southern England, but actually England is a flyer of that flag as well, it is just Cornwall is more so.

Tintagel has appeared in many movies, such as the Kid who would be King, and many repsresentations of King Arthur have mentioned it. Daugthter of Tintagel was also a story written by Fay Sampson. Plus as I say in my fun facts on hillforts page,

Other works about Tintagel include, Arnold Bax and Harriet Cohen's 1917 Work, Tintagel. Also Tennyson visited the site, and referenced the area in his works,

Another thing that intrigues me is the links between Brittany and Cornwall, which may have been especially strong in the Dark Ages,  but St Michael's Mount, and Mont Sant Michelle, are the best revealed of how that lasted even into the Medieval era and beyond.

So the fact is that the village of Tintagel, Cornwall, is a place that really goes into the King Arthur story as well, with Tintagel shops, selling lots if things related to it for tourists. The King Arthur Statue, Tintagel, has, really helps that, as well .I myself enjoyed crossing the bridge over the steep drop separating the mainland from the islet where the hillfort was, looking off the drop below, and seeing the statue there on that large rock of a isle. Having taken part in one,  I can also very much, muitos as the Portuguese say,  confirm the walks in Tintagel are nice as well.

Oppida, Castros, and other CONTINENTAL European forts, france, Germany and much more

Hillforts and castles and a directory on hillfortss 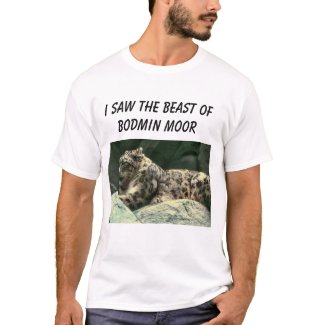 I saw the Beast of Bodmin Moor T-Shirt
by cooldudeproducts